Musiliu Akinsanya aka MC Oluomo who is the Chairman of the National Union of Road Transport Workers, has reacted to the backlash he received over his invitation to speak at a programme in the University of Lagos UNILAG.

MC Oluomo was invited by the National Association of Geography Students, UNILAG chapter to give a speech at their function today September 19th but the invitation was greeted with widespread criticism. Many Nigerians felt that MC Oluomo who is not educated, should not be given a platform in a citadel of learning such as the University of Lagos.

Reacting to the criticism, MC Oluomo who spoke through his aide, Jimoh Buhari, said he could did not attend the event again as he is currently in Abuja attending to urgent matters. He wondered why Nigerians would not want to give an opportunity to a person like him. Speaking, Oluomo said.

“I don’t know the reason people are going against the invitation because the people who invited him knew what they wanted him to say. If he had gone there and said something wrong, then the critical reactions would have been justified.

“Is it a crime not to be educated?
Should people who did not go to school go and commit suicide?

I think that if someone did not go to school and has a large following, it is enough reason for people to invite him to occasions. Those who invited him for the event had a strong reason for doing it.

“People are judging MC Oluomo based on hearsay. You don’t judge a book by its cover. We are also making efforts to change the negative impression people have about him.” 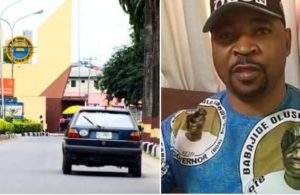