It is good to be the first to accomplish a feat and it feels really good to be recognised for it. Today, Nigerian blog Factboyz wants to recognise a hero who should be known by all as she accomplished a great feat setting an example for African and Nigerian women.

Kofoworola Ademola was born in 1913 to the well renowned Lagos lawyer Omoba Eric Olawolu Moore, a member of an Egba royal family, and his wife Aida Arabella (née Vaughan), who descended from Scipio Vaughan (through whom she also had Cherokee ancestry.

She studied at the CMS Girls school in Lagos before proceeding to New York USA where she was admitted into the Vasser College. She moved to Portway College Reading, United Kingdom and St. Hugh’s college Oxford where she studied from 1931 to 1935.

Due to her determination and sheer ruggedness to pursue her dreams, she earned a degree in education from Oxford while at Oxford she wrote a 21-page autobiography at the insistence of Margery Perham, a British historian and a scholar on African affairs to challenge British stereotypes about Africans, she wrote of her childhood as a mixture of western cultural orientation and African orientation.

In 1939, she married Adetokunbo Ademola, a renowned Nigerian lawyer who went on to become the Chief Justice of Nigeria from 1958 to 1972. He also doubled as the Chancellor of the University of Benin. The union was blessed with 5 children.

Lady Ademola as she is often called helped to pioneer women affairs in Nigeria. In 1958, when the National Council of Women Societies was formed she was chosen as the first president. As president, she became a board member of the International Council of Women.
Ademola was also a social worker, teacher and educator, she co-founded two schools: the Girls Secondary Modern School in Lagos and New Era Girls’ Secondary School, Lagos. She was a director of the board of trustees of the UBA (United Bank For Africa) and secretary of the Western Region Scholarship Board. She also wrote children’s books, many of them based in West African folklore,

Greedy Wife and the Magic Spoon, Ojeje Trader and the Magic Pebbles, Tutu and the Magic Gourds, and Tortoise and the Clever Ant, all part of the “Mudhut Book” series.
She was appointed a Member of the Order of the British Empire in 1959, receiving the award from Queen Elizabeth the Queen Mother.

Abubakar Tafawa Balewa’s government in the 1960s awarded her the honour of membership of the Order of the Federal Republic. 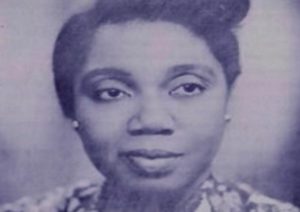