Lionel Messi, Cristiano Ronaldo and Virgil van Dijk have been nominated for the 2018/19 UEFA Men’s Player of the Year award.

The winner will be named – along with the UEFA Women’s Player of the Year and UEFA Champions League positional award winners – during the group stage draw in Monaco on Thursday 29 August. The UEFA Europa League Player of the Season will be announced the following day.

The top goalscorer in the UEFA Champions League and the European Golden Shoe winner picked up his tenth Liga title.

The UEFA Nations League winner and top goalscorer at the finals also scooped his first Serie A title.

The final man of the match for the UEFA Champions League winners also reached the UEFA Nations League showpiece.

What is the UEFA Men’s Player of the Year award?
For this award, players in Europe, irrespective of nationality, have been judged in regard to their performances over the whole season in all competitions – both domestically and internationally – at either club, or national team level.

How were the players shortlisted?
The shortlist of three players was selected by a jury comprising the 80 coaches of the clubs that participated in the group stages of the 2018/19 UEFA Champions League (32) and UEFA Europa League (48), along with 55 journalists selected by the European Sports Media (ESM) group, one from each of UEFA’s member associations.

Jury members chose their top three players, with the first receiving five points, the second three and the third one. Coaches were not allowed to vote for players from their own team. 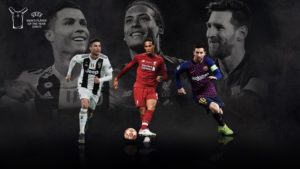