The likes of Lionel Messi and Cristiano Ronaldo will be out to reach new heights this season with the superstar duo among a number of players, managers and clubs chasing European football records.

After his impressive Champions League run ended at the quarter final stage last season with Juventus, Cristiano Ronaldo will be desperate to lift the title again this term. Should he help guide the current Serie A champions to continental glory, it will be Ronaldo’s sixth European Cup title. That would bring him level with fellow Madrid legend Paco Gento for the most times a player has lifted the trophy.

Barcelona star Lionel Messi will be eager to overtake Cristiano Ronaldo’s La Liga record for most hat-tricks this season. Ronaldo bagged 34 across his time with Real Madrid and Messi, currently on 33, has a strong chance of breaking that record over the next nine months with his last treble coming in March this year.

After claiming Golden Boots in the Premier League and La Liga, Cristiano Ronaldo is out to become the only player to win the award in Serie A as well to complete an impressive hat-trick. The current Juventus attacker finished fourth in the goal-scoring standings last season, just five goals shy of winner Fabio Quagliarella.

Having last season claimed his sixth La Liga Golden Boot, or Pichichi as its known in Spain, Messi equalled the record previously held by Athletic Bilbao legend Telmo Zarra. Should Messi bag another this season, he’d become the first player ever to claim seven. As it stands, the Argentine has won the Pichichi for the past three seasons and will take some serious stopping this campaign. 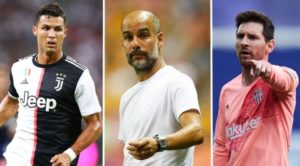