Here is the shocking moment in the Mexican league on Friday night as Tigres scored twice whilst Veracruz players protested over unpaid wages, MySportDab reports.

The visitors joined in on the protests for the first minute but then went on to score twice.

The hosts then started playing but then went quickly 3-0 down after eight minutes.

Veracruz owner Fidel Kuri said that he was ’embarrassed for the fans’ after the match and admitted that Tigres were well within theirrights to score their two goals.

‘The players wanted to send a message that wasn’t discussed, but they are in their right,’ said Kuri.

‘We were once again the joke of the nation, or the world with this topic.”

Veracruz’s debts stretch back six months and have not won a league game for 40 matches. watch the video… 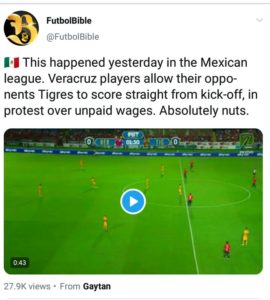