Organised labour on Tuesday demanded documents from the Federal Government to support its claims during a negotiation on the consequential adjustments on the New National Minimum Wage.

The Minister of Labour and Employment, Dr Chris Ngige, at the opening of the meeting, said the demand of the workers before the negotiation would shut down the economy.

But a source at the five hours meeting, which started at 2.45pm, confided in our correspondent that the labour leaders and the government’s representatives made concessions. He added that they failed to reach a definite agreement on the salary adjustments.

The meeting broke into sessions on a few occasions when labour and government teams had to leave the general session to meet their teams separately before continuing with the joint session.

Our correspondent learnt that the labour team demanded a number of documents from government’s team to verify claims made by the Federal Government during the negotiation.

The source said, “The two sides made concessions but in addition to the Federal Government concession, the team also introduced innovations which is strange to us. But we have asked for documents to back that position. However, whatever figures presented now at the meeting are mere proposals that labour is going home to examine critically before tomorrow’s (today) meeting.”

It was also learnt that the minister pleaded with the union leaders to consider the present state of the nation’s economy in their demands.

He said after the meeting that he was happy that there was no walkout or fight during the deliberation.

Briefing journalists, Ngige said, “I serve as the conciliator so I am not on any side. I belong to the two parties. As you can see, there was no fight and no walkout. That shows thatthings are going on well. We will continue tomorrow (Wednesday) because of areas that we could not touch.”

Addressing the media, the Nigeria Labour Congress Deputy President, Amaechi Asugwuni said, “For us at labour, the matters are straightforward but negotiations are still going on. We thought the meeting would be concluded today but that prediction was not successful. Therefore, adjournment became necessary. The struggle will still continue.

“We will meet again tomorrow (Wednesday) and that meeting will decide the fate of both parties. So far, commitments have been shown by both parties but we believe that the areas that are still in contest are critical and we urge government to see how it can shift ground positively. We expect that Wednesday’s meeting will end positively.”

The Head of the Civil Service of the Federation, Dr Folashade Yemi-Esan, who spoke for the government team added, “We have worked together and both sides have made a lot of concessions but we discovered that there are areas to be ironed out. There are some documents and information that are being sought and which we are providing. We will continue tomorrow with the belief that we will reach an agreement.

But earlier on Tuesday, the Federal Government said the economy would be shut down, if it met the demands of the organised labour on the New National Minimum Wage.

Ngige, who stated this during the Federal Government’s meeting with labour leaders in Abuja, said the unionists should not misinform workers about the government’s position on the consequential increase in workers’ salaries as a result of the new minimum wage of N30,000.

The labour leaders had at a meeting with the minister on Monday submitted their proposal on percentages on consequential increases in the new minimum wage.

Ngige, in his opening speech before the technical session that government had with labour on Tuesday, said government would not intimidate workers.

The minister said the Federal Government’s personnel cost had increased astronomically and that accommodating more wage bill like what labour was demanding could shut the economy down.

Ngige stated, “It is a matter of balancing a budget that is 76 per cent recurrent and 24 per cent capital. For me, it is nothing to cheer about. In the 76 per cent, government has captured N200bn for the consequential adjustment for the minimum wage and so on. These are all parts of personnel.

“I don’t want labour to misinform workers. They should not be misinformed. Workers should know that this is a consequential adjustment and not a holistic wage review. We must give the government the benefit of the doubt. I am for labour and I will not sit and watch them being cheated. I will also not sit and watch labour intimidate government. If you dangle a strike, it is intimidation and the International Labour Organisation Convention does not permit it. People should negotiate freely. If government threatens you in the course of negotiation, it is intimidation.

“I am your friend and friend of government. In fact, government feels I am not doing enough. That is why I am talking to you so that you can talk to your people. We cannot allow the government to shut down the economy because it wants to pay salaries and wages.

“The 2020 budget of N10.3tr has N3.8tr as personnel cost without overhead. If you add running cost and other incidental costs, the total recurrent budget as presented to the National Assembly has taken 76 per cent. Where do we get the money to build roads, airport, rails, health centres, schools etc.?”

Before the meeting, Ngige received the leaders of the Nigeria Union of Local Government Employees, led by its president, Ibrahim Khaleel.

Workers were on Tuesday divided on whether they should go on a strike over the new minimum wage.

A breakaway faction of the NLC, condemned the strike being planned to embark upon by the Trade Union Congress and the Nigeria Labour Congress.

The ULC president, Joe Ajaero, in a statement, said the union said critical sectors that would make the strike to be successful were left out of the decision.

The statement said, “We were part of the 16-man technical committee that gave birth to the Tripartite Committee on the Review of the National Minimum Wage and in which we participated vigorously in all the processes leading to its negotiation and the various struggles to deliver it for the benefit of Nigerian workers and peoples.

“The dynamics of the struggle dictate that we mobilise all our constituents both primary and secondary to make for a successful strike. A man that intentionally goes to war without its most critical weapons has prepared himself to fail.

“Nigerian workers cannot be forced to negotiate from a position of weakness as in this case. Why would we want to go into a nationwide strike without mobilising all the national stakeholders and civil society organizations, market women and students?

“Obviously, the proposed nationwide strike is designed to fail or at best watered down to achieve nothing but to bring few Nigerian workers on the street to dance and wave flags without shutting down the economy which is the effect a nationwide strike ought to have”.

In Lagos State, Governor Babajide Sanwo-Olu, said that the state was ready to pay more than the N30,000 benchmark for the new National Minimum Wage.

Sanwo-Olu, who said this during a meeting in Ikeja with the organized labour in the state, said the payment would start after the conclusion of the Federal Government and labour leaders’ negotiation.

He said, “As a government, we take the issue of minimum wage very seriously. We know how important and germane it is to the wellbeing of our people. We are technically ready to implement the new minimum wage. I made a commitment during my previous interactions with the labour unions before my assumption of office and I am still keeping to the promise made. However little it is, we will certainly pay more than N30,000 minimum wage.

“We understand the position Lagos occupies and we understand the challenges workers are facing in Lagos. If other states can raise that amount, I believe Lagos needs to show a bit more to appreciate workers’ contribution to the growth of our state.”

During an interaction with the labour union leaders, Sanwo-Olu listened to various demands of the workers, which included arrears of workers’ medical allowance, introduction of premium insurance for the workforce, timely pension payment for retired workers, mortgage scheme for housing, befitting labour secretariat and representation of workers’ unions in MDA boards’ appointments.

Meanwhile, the NLC in Zamfara State has directed its members to stay at home as from Thursday if the Federal Government and the organised labour unions fail to agree on the new minimum wage.

In a statement in Gusau on Tuesday, the state NLC Secretary, Bitrus Gyang, said the congress had written all unions in the state to mobilise their members.

The House of Representatives Committee on Labour, Employment and Productivity has decried the failure by the organised labour to appear before it in Abuja on Tuesday.

The committee said the invitation was part of the lawmakers’ intervention in the crisis between the workers and the Federal Government over implementation of the new minimum wage.

Chairman of the committee, Mr Ali Wudil, said the intervention by the lawmakers was to prevent the looming industrial action by labour scheduled to begin on Wednesday.

The NLC, in its letter to the committee said it could not honour the invitation because of the Tuesday meeting with the Federal Government on the consequential adjustment of salaries. 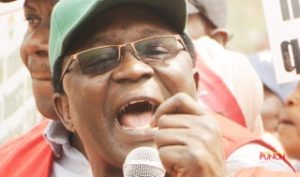