The glamourous grand finale of the 2019 Face Of Democracy Brain Pageant has ended with the coronation of Joy Omanibe as the historic winner of the pageant. Her emergence as the reigning queen was subject to her outstanding vigour, creative intellect and iconic prospects.

The 25 years old graduate of Houdegbe North American University, Benin Republic was filled with tears of Joy and excitement as she was confirmed winner of the 2019 edition of Face Of Democracy Nigeria.

The pageant was packaged by Fajag Concept, Partnered by Hip TV, supported by FIRS and hosted by popular Screen celebrities Ike Ogbonna and Nancy Isime. It was an awesome night of excitement as the judges led by Dr. Kelly Sampa and Former Miss United Nation Precious Fani Kayode had a difficult time in deciding the eventual winners.

However, the newly crowned Queen, Omanibe told reporters that her reign as the Face Of Democracy Nigeria will help promote the sterling values of women.

Other distinguished recognitions were
FDN Northern, which was won by Miss Kaduna, Miss Bayelsa was crowned FDN South South, Miss Ebonyi South East and
Miss Ondo was decorated as the FDN South West

Face Of Democracy Nigeria is known for outstanding capacity in identifying, training and nurturing models to fame and international recognition. 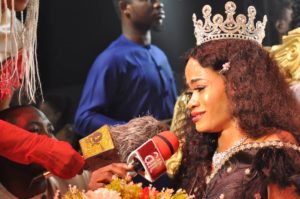