The students have equally shut down the main gates leading to the Ugbowo main campus of the university, depriving staff of the institution from leaving or going into the school premisses.

CAMPUS GIST reports that the students are protesting failure of the school management to restore electricity and water to those living in the university’s hostels.

The protest which commenced at about 6.a.m on Friday has halted vehicular movements in and out of the ancient city of Benin.

Our correspondent observed that many travelers to and from Lagos were forced to take to other alternatives, including the popular Benin bypass.

CAMPUS GIST reliably gathered that the students had earlier written to the school management to fix the water and electricity problems but nothing had been done to resolve the issue.

As at the time of filing this report, at about 11:30 a.m, the ever-busy and commercial Ugbowo axis of the city is currently at a standstill.

When our news crew visited the institution’s administrative block, otherwise known as VCO, it was void of the usual day-to-day activities.

The Vice Chancellor, Prof. F.F.O Orumwense; Registrar, Mrs O. A. Oshodin and PRO were said to be out of town when our news crew called at their offices.

This is not the first time students of the University of Benin will be protesting against epileptic power supply and lack of water in the school’s hostels.

Postgraduate students of the school had last semester, protested against the development which led to the suspension of some hostels mayors and mayoress. 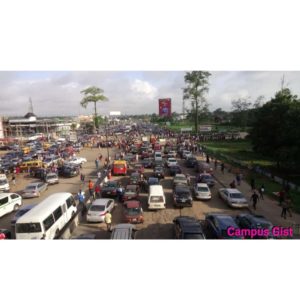