My name is Ramota Jimoh and I am Isiaka’s biological mother.

How old was he?

He was 21 years old. He was still an apprentice. He was learning electrical installation and he was about to graduate but his life was cut short.

What was your last conversation with him?

It was not long after he left my place that I called him on the phone and asked where he was. He told me that he went to work and he had left and was about to meet someone whom he wanted to work for. I asked him to go ahead. That was our last conversation.

How did you hear about his death?

After that conversation, I had the urge to call him again and I discovered that I couldn’t get through to him again. I was not apprehensive at that time but his dad called me and asked me to rush to Bowen Teaching Hospital. I asked him why and he told me that my son had been shot.

Did you have any premonition that such an incident would happen?

I can say yes. I just discovered that I started having a stomach upset shortly after I spoke with him (Isiaka) on the phone. Nobody had told me anything when I started having a stomach upset. After that, tear gas started affecting my eyes and because I live around Ile Ewe, the wind blew it to the area. I just started feeling uncomfortable and I went to use the toilet twice within 10 minutes. But I didn’t suspect that any unpleasant thing had happened to my son. It started raining and immediately the rain stopped, I received a call from his dad to go to Bowen Teaching Hospital.

Did he die on the spot?

No. He was taken to Bowen and when I got there, they were attending to him. They said he needed blood transfusion and they were doing that when he gave up the ghost.

At what time of the day did it happen?

It was at about noon on Saturday.

How would you describe your late son?

He was a very good boy. He was jovial, hard-working and he loved everybody. I know him, he was very obedient. He didn’t fight or quarrel with anybody. He was not a Yahoo boy (Internet fraudster). He was very hard-working.

Had he been harassed or arrested by the police for any reason?[

That never happened. You can go round the police stations and find out. You can’t find his name in their books. Ask people around, they will tell you the type of person Isiaka was. It’s very unfortunate that he was killed.

Are there things he promised to do for you before his death?

He promised me many things but death has affected all that. God said it was his time and that was why he took him away. It’s painful but there is nothing anybody can do about it. He used to assure me that all would be well. He would hug me, peck me and show me that he loved me. Isiaka would always come around me just to make sure that I was happy. He promised me so many things but police killed him. May God grant him eternal rest. God gave me and he has called him back. I accept it that way because God owns me, the mother of Isiaka, and I cannot question him. I accept that as my destiny. I pray that God will stop such bad occurrences in our family. This is enough. I accept my fate.

There have been protests against police brutality. What is your advice to the government on it?

The youths are angry against SARS because they trouble them too much. They arrest and harass the innocent and the guilty. There should be a way for the police to know criminals from the law-abiding ones. Are they saying every young person is a criminal? Aren’t there young people among the police themselves? The protest is against the problem they are giving the youths. I want the government to find a way of listening to the protesters and do what they want. The government should make the economy better. Let there be jobs for the youths and everybody. If everybody is meaningfully engaged, there will be little problems for even the police. 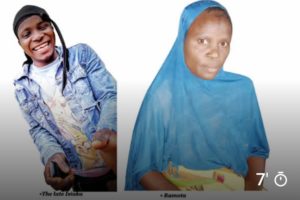