Some ‘non-existent’ projects worth N4 billion in the 2020 budget proposal by the National Inland Waterways Agency (NIWA) has been busted by a joint session of the House of Representatives Committee on Inland Waterways, Land Transport, Ports and Harbours, and Marine Safety and Education, and the Senate Committee on Marine Transport.

The amount was budgeted for the acquisition of vessels and barges as well as procurement of dredgers and other equipment, but it was learnt that N2.2 billion was appropriated for the projects in 2018, with an additional N1 billion appropriated for same project in 2019.

Vanguard reported that some projects NIWA claimed it embarked on which were busted include the National Freight Office in Idi-Iroko, Ogun State for which total sums of N40.500 million was appropriated in 2017; N166 million in 2018; N99 million in 2019 while the sum of N400 million was proposed in the 2020 budget estimates of Federal Ministry of Transportation budget line item: ERGP 27102753. Others included the procurement of Dredgers and other related equipment/vessels which had the sum of N1.5 billion proposed in the 2020 NIWA’s 2020 budget.

Following the disagreement that ensued over the existence of the said projects, the Deputy Chairman, House Committee on Waterways, Hon. Jarigbe Agom Jarigbe suggested a thorough investigation on the projects and the utilization of funds.

He said: “The facts on this matter are on the budget proposal for 2020 and previous budgetary provisions.  For instance, there was a line item that has to do with the construction of the National Freight Office in Idi-Iroko, Ogun State. In 2017, it appeared in the Appropriation Act in the sum of N40 million was pencilled down for that project. In 2018, N166 million was captured for that project an increment of over 400%.

“The astronomical increment on the project is unimaginable. There are other items on that budget, like NIWA, there is an item there, for instance in 2019 there was a provision of about N1 billion for the acquisition of Dredgers and other related equipment/vessels and in 2020 there is a proposal of N2.7 billion. Meanwhile, the project appeared in 2018 at the sum of N2.2 billion.appropriated for that project.

“These show a lot of inconsistencies. When you look at the budgets it looks as if someone somewhere is just fixing figures and at the budget defence today. I have to raise some of those issues and I also think these issues need proper clarifications before this budget is passed.”

The lawmakers added that tagging the projects ‘fraudulent’ is uncalled for at this time until the outcome of their investigation. 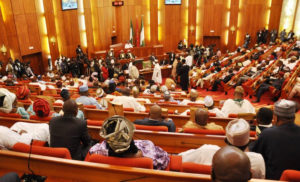