A newly promoted Deputy Comptroller in the Nigeria Immigration Service, Alhaji Usman Ndagi died hours after receiving news of the demise of his sister.

IgbereTV gathered that the Immigration officer from Mokwa, Niger State, popularly known as Yandakoture, died in Abuja on Thursday morning, November 19 while his sister died on Wednesday night, November 18.

According to a member of the community, Yax Mokwa, the late officer died shortly after complaining of dizziness while his bags were being packed in the car for the journey to Niger State. Yax Mokwa wrote:

“One of Kin Mokwa’s most illustrious sons is shockingly gone. Alhaji Usman Ndagi (popularly known as Yandakoture). A mentor, amiable, accomodating, and always has his people at heart, providing opportunities for them to develop and empower themselves. His many positive impacts on our society are immeasurable.

The death of his sister came as a shock yesterday to everyone and he was set to leave Abuja for Mokwa this morning. He asked for his bags to be taken to the car as he was feeling a little dizzy and would want to relax a little only for them to return to a lifeless body.

I saw him on the 6th of September this year at his house in Minna and spoke with him last week over the phone not knowing that those would be my last moments with this man that has a lot for one to emulate most especially when it comes to giving back to our society.

This is indeed a painful death to us all and if death could take something else we gladly would have offered but this is a promise of Allah that all of us will surely taste death, one after the other. His sister yesterday and him this morning and we are next.

May Allah grant the two of them Jannatul-Firdaus and give the families they left behind the fortitude to bear these irreparable losses.”

Meanwhile, friends, family members and colleagues have taken to Facebook to mourn the brother and sister. His cousin Kazim Audu shared screenshot of their chat when he congratulated the late officer on his recent promotion.

“I was tore up into pieces when I received the shocking news of the departure of this paragon of hope. My mind is seriously still struggling to process what could have gone wrong so sudden. Like losing a sister a night before and following her the following morning. That’s so tragic and devastating to say the least.
Like many others, this heavy grief will definitely take me time to overcome.

I have a lot to miss about him. Most of which, will be the hilarious relationship we share.
A cousin who often time sits on the position of a father and guardian at the same time. Just last week here, we had long chat on Facebook where I also seized the opportunity to congratulate him for his promotion to the position of deputy controller of immigration.
I told him that I will love to join him and he jokingly replied that I will be too lazy to be an officer and also added that I was a troublemaker

This unforeseen tragedy has dropped inside of me a turmoil that will take time to heal. I will continue to console myself that the lord has better plans for you.
I will continue to pray for your eternal rest.
I will always play back the happy and hilarious moments and assume you are forever here with us.
The lives you positively touched during your stay on earth will forever be remembered.

You left a wonderful family behind and it is my prayer that Allah grant them the fortitude to bear this massive lost. May Allah forgive your shortcomings and grant you the highest level of Janatu Firdausi. 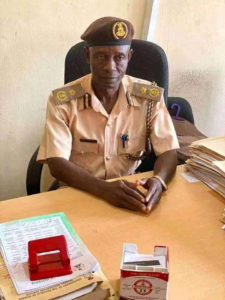