Making his first appearance of the season, Neymar scored and set up Casemiro’s opener in Miami on Fridaynight, MySportDab reports.

The Brazil star made his long-awaited return in the South American champions’ 2-2 friendly draw with Colombia.

An ankle injury had sidelined Neymar since June and forced the Paris Saint-Germain forward to miss Brazil’s successful Copa America campaign as he eyed a return to Barcelona.

The 2-2 draw extended Brazil’s unbeaten run to 17 matches, a streak that dates back to their 2018 World Cup elimination by Belgium. 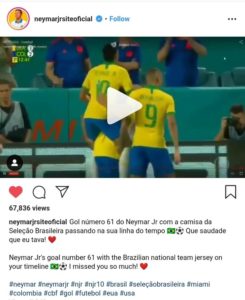