Nicolas Pepe has become the first player to successfully dribble past Virgil van Dijk in his last 50 Premier League matches.

According to OptaJoe, the 24-year-old winger smashed Van Dijk’s impressive feat during the first half of Liverpool’s clash with Arsenal at Anfield.

OptaJoe tweeted: “Nicolas Pepe has become the first player to successfully dribble past Virgil van Dijk in the Dutch defender’s last 50 appearances in the Premier League, since Mikel Merino in March 2018 for Newcastle. Beaten.”

Pepe, who became Arsenal’s club-record signing this summer, picked up the ball at the halfway line in the sixth minute as the Liverpool defender attempted to close him down.

But the Dutch centre-back was left helpless when Arsenal’s marquee summer signing flicked the ball out of his reach and showed off his rapid pace down the wing.

Manchester City striker Gabriel Jesus dribbled his way past the Liverpool defender, 28, in the Community Shield clash earlier this month.

But a spokesperson for the FA came out to say that Jesus’ dribble didn’t officially count to the stats and Van Dijk’s record remained intact at the time.

Van Dijk’s record has now been shattered and fans have flooded social media with reactions to Pepe ending the Liverpool star’s long-running streak. 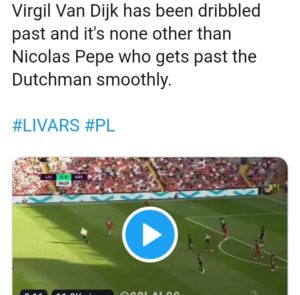