A Nigerian who is a detective in the Toronto Police, Canada, Sergeant Bassey Osagie, has listed the reasons why xenophobic attacks are carried out by South Africans on Nigerians and other foreigners.

In an interview, Osagie stated that laziness on the part of the people of South Africa is fast turning the country into a typical African country.

”South Africa is becoming like a typical African country. The local people there are lazy and the government is not providing job for the regular South African people.

The local people are frustrated but their just taking it on on the wrong people which they perceive to be their enemy. Our people don’t deserve to be killed. Now you have a group of jobless South Africans who have no source of income, they see foreigners driving expensive cars, they see foreigners living better than them, so they believe those foreigners are responsible for their problems”.

“That’s partly the problem. The Nigerian government is not helping the situation. The Buhari administration refuse to take decisive action against South Africa and make their government make tough decisions.
I’ve been to Cape Town and I understand that they have a very strong and effective police they can call upon to solve this problem. But they are dragging their feet because they don’t have the repacaution. I think the Buhari administration should have been more purposeful, more visionary and take decisive action”.

He added that as a Canadian citizen that he is, if anything should happen to him when he visits Nigeria, Canada would ensure somebody pays the price. This he said to show the Nigerian government how serious they need to treat their citizens.

“I’m wearing this uniform today, I can assure that if anything happens to me when I’m in Benin City, somebody will pay the price”, Osagie said. 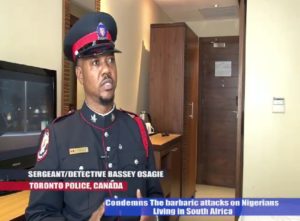