Disheartening to watch these videos from my home! You’re fighting the wrong war, fighting the wrong people. How do we walk around hating each other? Africa is one! We’re all the same people! Pls don’t lose yourself! #SayNoToXenophobia One Love

Pls educate yourselves, educate the kids , educate the youth! We’re all humans before anything else! “Humans” !! And most importantly “Africans”!

I’ve seen so many insensitive and dum*b stu*pid comments from You celebrities and I’m so disappointed! This is not a time to fight or point fingers!! Let love lead. Use your head! u fcking dumb fcks! People are dying foreal! Watch what you say!

Y’all want to go around preaching hate and fighting each other when the real problem is not even on social media! You clout chasing di*ck heads! #SayNoToXenophobicAttacks ! Fight the real problem! Government! Poverty! Education

and if you don’t have anything sensible to say at this sensitive time pls just promote your music and Bleep off. Nobody ask una papa for opinions !

Ok. I have been away from social media personally until today. Ordinarily at a time like this, I should come here and say something to try and calm the situation because my Dream has always been to Unite AFRICA and make us realise that Together we will Literally rule the world…

But Today After watching the Killing of my people in South Africa the same way we have all watched it happen a few times in the past. FU*CK ALL THAT! I personally have had my own xenophobic experiences at the hands of South Africans and because of that…..

I have not set foot in SA since 2017. And I will NOT EVER go to South Africa again for any reason until the SOUTH AFRICAN government wakes the fu*ck up and really performs A miracle because I don’t know how they can even possibly fix this.

This goes against everything I stand 4, but at what point do we take action? I understand that years of Oppression has confused South Africans to the point where they see the pple who came to their defence during their Oppression as their Enemies and then worship their oppressors

And @MI_Abaga it’s F*uck @akaworldwide from now on. And if you down with him, it’s F*uck you too. I respect you too much, please Don’t throw my respect out the window cuz I swear you will fly out with it.

Lemme also say that there are some South Africans who are Amazing, Progressive AFRICAN people and I will forever Love them like I Love myself. But they are not many at all.

And to my Brothers and sisters I am not encouraging any Violence or anything but please PLEASE Protect and Defend yourselves at all times, it may not seem like it but there’s always a way. Management will now take back control of Burna Boy’s Social media. God bless AFRICA

Just to make it clear. I personally didn’t lose anyone to this stupidity. BUT I don’t give a Bleep, my brothers are dying for nothing! I too move at anyone who gives silly excuses!

I refuse to watch the barbaric butchering of my people in SA. This is SICK. For this reason I will NOT be performing at the upcoming DSTV delicious Festival in Johannesburg on the 21st of September. My prayers are with all the victims and families affected by this.

If our country good ? Wetin we go find go southy

I pray for healing.. our continent has been hurt so much and we are acting out from pain!!! Say NO to Xenophobia!!!

Also.. I can speak honestly in saying my bro @akaworldwide loves Nigeria.. taken out of context his tweets can be misinterpreted.. however he loves and respects Naija!!!

I have been insulted and threatened so much.. And though a part of me wanted to turn to anger.. I know that it was a test for me to lead with love.. We have to see past our hurt into our hearts.. and fight hatred with love

To everyone I offended yesterday I apologise.. It is always the right time for healing.. I hope we can begin to listen to each other and discuss real lasting solutions. I know I will..
Last.. I pray that we will all have someone that will speak the truth on our behalf in spite of the repercussions. If I did so in error God will judge… But courage is being able to say no when everyone else says yes.. no matter the personal cost..

The #Xenophobia attacks by some South Africans against Nigerians and other foreign Nationals are completely heartbreaking. Sad to see people that suffered through decades of apartheid, violence and hatred, now turning around to do the same/worse to others.

The people that South Africans look up to should PLEASE speak up and denounce #Xenophobia. The Government, business people, athletes, artists, media personalities, and even the average citizens have a responsibility to stand up for justice the way the world stood up for SA

Africa’s problem is AFRICANS. Some in Government, some in the general population.. but Africa’s problem is Africans. I keep pushing for the day that the rest of us will rise to become our solution. May God help us. And may we realize that Heaven helps those who help themselves. 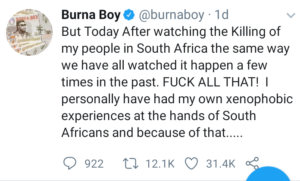