While performing the handing-over ceremony in Yola, the Adamawa State capital, the Customs Comptroller in charge of Adamawa and Taraba States, Kamardeen Olumoh, said the handing-over was a directive from the office of the National Security Adviser, NSA.

Mr Olumoh said: “I am directed from the National Security Adviser to comply, release and hand over the vehicles to the American government.”

DAILY NIGERIAN reports that the vehicles were received by Kathleen FitzGibbon, the Deputy Chief of Mission, Embassy of United States of America in Nigeria, alongside security Attaché of the American Embassy including Major Peter Shayborn of the US Air Force.

In her reaction, Mrs FitzGibbon thanked the Nigerian government for the understanding, adding that the vehicles were en route to The Niger Republic for a security mission.

“Nigeria and America have good relation and understanding and the vehicles were en route to the Niger Republic for security mission,” Mrs FitzGibbon said.

She, therefore, commended the Nigerian government for the well-keeping of the vehicles, saying that the American Air force Carrier would transport the vehicles to Niger Republic. 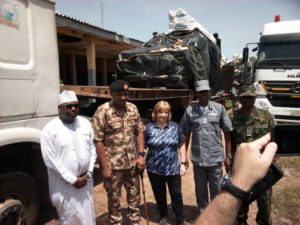