Nigeria retirees under a platform known as the Nigerian Union of Pensioners(NUP) are protesting and demanding that the government reviews their minimum pensions. They matched and took the protest to

This agitation emanates barely two months after the Federal government and organized labour reach an agreement on the new minimum wage of from grade level 1-5 and grade level 6 from #30,000 and the consequential adjustment agreement of grade level 7-17.

Speaking, the President of the Union, Pa Abel Afolabi made it clear that

the vast majority of pensioners depend on the token they receive for survival. And also decried that after the Federal Government and Organized labour had agreed upon the New Minimum wage and consequential adjustment, that no one has been able to bring forward before the government about the pay or minimum pension for the retirees.

He lamented that a “vast majority of pensioners in this country earn below N10,000. It is people in this category that are agitating on what is happening to us.

Responding, Chairman of National Salaries, Incomes and Wages Commission’s, Mr Ekpo Nta said that the President Buhari government is already working on it and that at the last Federal Executive Council, the matter was discussed.

The Chairman in his words said, “Everybody is aware during negotiation on the minimum wage and its consequential adjustment that there must be corresponding increase for pensioners and we shouldn’t wait for agitation again before we do that,” Nta assured the protesting pensioners. 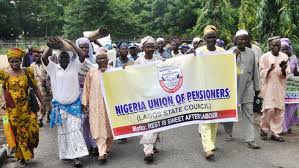