Former Minister of Education, Oby Ezekwesili, has come under fire for attending the ongoing World Economic Forum in South Africa despite federal government’s boycott of the event over xenophobic attacks on Nigerians in the country, Igbere TV reports.

Igbere TV had reported that Nigeria, alongside African countries like Rwanda, Malawi and DR Congo, boycotted the two-day summit holding in Cape Town following the attack on foreigners in South Africa.

Ezkwesili earned heavy criticisms from Nigerians after photos of her attending the summit surfaced on social media, particularly on micro-blogging platform, Twitter.

President Muhammadu Buhari’s Personal Assistant on New Media, Bashir Ahmad, was among those to first criticize the former presidential candidate in the last general election.

“Surprised to see some Nigerian experts in everything governance who spend most of their time lecturing the Government on empathy and the art of prioritizing national interest over individual benefits, (but) still went ahead to attend the summit”, he wrote.

Other critics claimed that Mrs Ezekwesili could not afford to boycott the event because of “her love for dollars” and the “camera”.

Apart from the former Minister, Founder of Zenith Bank, Jim Ovia, was also spotted at the event and currently being dragged on Twitter alongside Oby.

Below are some reactions to her attendance at the event, as obtained by Igbere TV.. 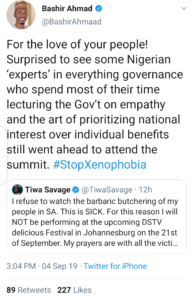