Nigerians have dragged Forbes and the Peoples Democratic Party (PDP) presidential candidate, Atiku Abubakar over, serial entrepreneur Obinwanne Okeke who was arrested by the US Federal Bureau of Investigation (FBI) over conspiracy to commit fraud of over $12 million.

In July, 2014, Atiku Abubakar listed Invictus Obi as one of the largest private employer in the country.

The founder of Invictus Group was also named among 100 Most Influential Young Africans 2018.

The FBI has not pressed charges against Okeke, however, news of his arrest filtered in late Friday.

Nigerians on Twitter have taken swipes at Forbes and others, saying the financial magazine should have investigated the source of Okeke’s wealth before listing him as a model for young persons. 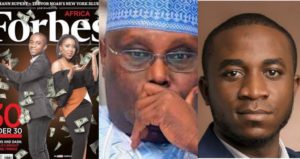