According to a new study, people who rate themselves as the happiest are more likely to share a certain gene.

A researcher in a recent summit claimed that this holds true for countries like Nigeria.

For the study, the researcher used data from the World Values Survey (WVS) he gathered.

The WVS is a global research project itself, looking into peoples’ values and beliefs, and how they change over time and in response to what.

From this, she figured out the average percentage of people who reported to be “very happy” from countries around the world, and then looked at climatic data, prevalence of disease, World Bank economic data, and population genetics.

According to the researcher, she found a “strong correlation” between the happiness of a nation and the prevalence of a particular variant of the fatty acid amide hydrolase, or “FAAH,” gene.

This, they say, prevents the breakdown of a particular chemical, anandamide, known to enhance “sensory pleasure” while helping to “reduce pain.”

Those countries that have populations with the highest proportion of the gene variant also report themselves to be the happiest, she said. 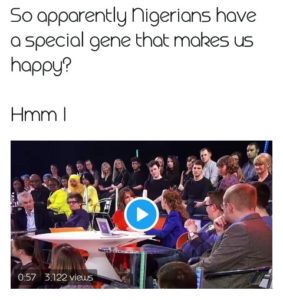