Authorities in the United States have unsealed a 252-count grand jury indictment charging 80 people with participating in a conspiracy to steal millions of dollars through a range of fraud schemes and laundering the funds through a Los Angeles-based network.

The US Attorney’s Office says Thursday most of the defendants are Nigerian citizens.

FoxMeek gathers that fourteen defendants have been arrested, mostly in the Los Angeles region. Six others are believed to be fugitives in the US and the others are abroad, mostly in Nigeria.

Authorities say the schemes targeted victims in the US and around the world, and some lost hundreds of thousands of dollars.

US President, Donald Trump has toughened visa issuance to Nigeria and other countries whose citizens have a track record of crime and overstaying beyond the validity of their short-term visas.

FoxMeek recalls that last month, it announced visa restrictions on those involved in undermining Nigeria’s presidential and parliamentary elections in May.

Mr Trump is also accused of referring to Nigeria and others as shithole countries during a meeting with lawmakers in the Oval Office in January 2018. 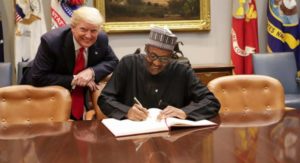