The Special Adviser to the President on Media and Publicity, Mr. Femi Adesina, says Nigerians ought to be thankful that the spate of attacks by Boko Haram has dropped.

He said despite the recent bombings that have claimed scores of lives, the impact of terrorism was still less than what Nigerians faced under former President Goodluck Jonathan.

Adesina, who is the most senior spokesman for the President, Maj. Gen Muhammadu Buhari (retd.), said before the regime came into power, about six bombs were going off in a day.

He said this during an interview on Channels Television’s ‘Politics Today’ programme on Sunday.

The President’s spokesman was asked to explain to Nigerians why his principal had failed to deliver on one of his key promises, which was to defeat Boko Haram.

He said the North-East under the Buhari regime was like heaven, while that of former President Goodluck Jonathan was hell.

“Yes, there was a bomb or two today (Sunday). There was a time that there were five, six, 10 bombings in a day in this country.” He said Nigerians ought to be thankful for the job being done by the government.”

When asked to respond to criticisms levelled against him for his article in which he berated the Christian Association of Nigeria, Adesina said he had no regrets.

He said the President of CAN, Samson Ayokunle, did not deserve respect for issuing such a statement critical of the President over the murder of Lawan Andimi

The President’s spokesman said the fight against corruption; insurgency and the task of reviving the economy were on course. 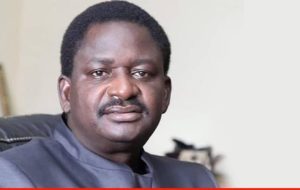