» ‘No Reason To Doubt My Backside, It’s What My Mum Gave Me’ – Actress Inem Peter | Parrot Gist

Actress, Inem Peter, doesn’t have to UnCloth to project her sex appeal. Her provocative hips and curves have made her an object of adulation on social media.

In a recent chat with Sunday Scoop, the Instagram sensation stated that she doesn’t know why anyone would say her bum isn’t real. “I see no reason for anybody to think that my sexy body is not real. It’s what my mum gave me, so the doubters should feel free to ask her,” she said.

On what she does to maintain her shape, Peter said, “There is nothing in particular I do but sometimes, I use the treadmill. I don’t do squats because it will make my bum and laps thicker, which I don’t want. I am perfect just the way I am.”

The actress, who has featured in movies such as Last Date, Lying Game and Hard Fate, also joined the camp of those who are of the opinion that being an actor is not exactly a lucrative venture. She said, “I am in Nollywood for the passion because it’s truly not lucrative. The peanuts I get for acting is nothing compared to the talent, pain, effort and risk I put into the craft.” 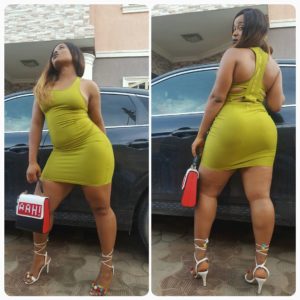