In the coming few weeks, November 16 to be precise, governorship election will hold in Bayelsa state.
However, my interest was drawn by the publication in THISDAY Newspapers of Tuesday, October 29, 2019 on Page 18 with the headline “Can Dickson Pull Off the Jagaban Phenomenon in Bayelsa?”

Indeed Jagaban’s Commissioner for Works during his tenure as Governor of Lagos State was handpicked to run as governor in one of the western states. In the same vein, ‘the Lion of Bourdillon raised the hand of one, who meritoriously burned the candle to become a holder of the highest award of the Nigerian Bar. He became his (the Jagaban) successor while the commissioner too became governor. This kind of narrative is endless.

The crux of the matter is the fact that, in Nigeria today, sitting governors are ready to ‘do or die’ in making sure that their anointed candidates become their successor.

Why is this? The answers are not far fetched. The Jagaban in copying some of our political forefathers, who practiced the politics of self and family, are beginning to institutionalize in Nigeria, a type of democracy that will be peculiar to this country alone: The government of the sitting governor and his cohorts, negating the actual principles of democracy of the government of the people by the people.

Every governor in Nigeria today seems to forget some things in the government house after the expiration of their tenure. Since 1999, when the Jagaban became the Governor of Lagos state and till date, he (the Jagaban) has been the one still ruling the state remotely in complete bias against the will of the people for a fair playing ground. The resultant effect of this grip has translated but not limited to the following: a house of assembly that take decisions affecting the whole state after consultation with ‘Oga’ at Bourdillon; a taxation system that is leased out to consultants at a fee; selection of more than 50% of the commissioners; a rail project of 27.5 km that has endured more years than that of Ethiopia of 759km that started two years after that of Lagos. The Ethiopian standard gauge rail has been completed while that of Lagos state is still under construction. I do not want to go into figures that are involved in both projects. The facts are capable of jolting one from a chair. The irony of it all is that the company that did the Ethiopian miracle is the same one that is constructing the Lagos ‘light’ rail project.

In Lagos today, there is need for all who have personal cars to travel within the metropolis in public transport especially the Danfo means of transportation. At Oshodi axis alone, there are boys who work for M.C Oluomo, the chairman of the National Union of Road Transport Workers. Every Danfo operating in Lagos is forced to cough out an average of N3400:00 (three thousand, four hundred naira) daily.

The history of the emergence of M.C Oluomo is quite handy too. The role played by government after 1999 in ensuring his (M.C Oluomo) coronation as king of Area Boys in Oshodi and beyond is another script for the future. Today the menace of Area boys which has been legitimized by government affect all aspects of life of the majority of Lagosians. The last general elections conducted by INEC in the country can be likened to the chess game in Lagos state. The puns are the area boys, the Knight is represented by M.C Oluomo who can gallop above any height to inflict any level of pain in the electorate without check. The end of the story is that the electorate that power belongs to, are cowed into their houses and barred from from exercising their franchise.. They can burn, shoot and maim. That was the story at Okota and many more areas in Lagos.

Now to the question Mr. Emmanuel Addeh asked that “Can Dickson Pull off the Jagaban Phenomenon in Bayelsa? ” In my opinion: what the Jagaban does in Lagos and some other states in the West is nothing but fraud and thuggery at its best. If ‘THISDAY a renown national newspaper can make this a point of reference, then the pen can never be mightier than the sword in Naija. 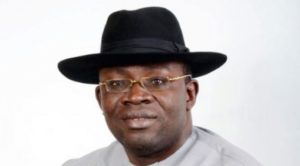