Some members of the National Union of Road Transport Workers (NURTW) in Lagos State on Wednesday marched on the premises of the Lagos State House of Assembly in Alausa, Ikeja.

They protested the emergence of Musiliu Akinsanya aka MC Oluomo as the chairman of the caretaker committee of the union.

It was gathered that Baruwa issued a statement on Tuesday dissolving the executive committee of the state chapter hitherto headed by Comrade Tajudeen Agbede, who is now Baruwa’s deputy, and replaced it with an 18- member caretaker committee led by MC Oluomo.

MC Oluomo, the chairman of Oshodi branch, Lagos chapter of the union, is one of those contesting for the Lagos State NURTW chairmanship.

Speaking during the protest, one of the leaders, the Chairman of Ojuwoye NURTW branch, Ademola Olanrewaju, alleged that MC Oluomo’s emergence would cause chaos.

“A meeting was held yesterday and after the meeting, it was decided that MC Oluomo should emerge as the chairman of the caretaker committee.

“Directly or indirectly, they are trying to impose him on us because there was fracas in Abuja and both parties were supposed to be dealt with, but MC Oluomo’s group was exonerated.

“What we are agitating for is that we don’t want MC’s government in Lagos State.

“Lagos State has given us the little it can in terms of empowerment, by giving us what to eat.”

At press time, no government official had addressed the protesters. 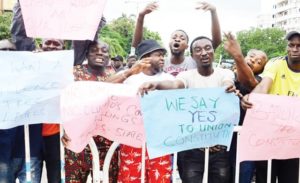