Former presidential candidate, Oby Ezekwesili, has urged Twitter to unfreeze the account of the co-founder of Bring Back Our Girls (BBOG) movement, Aisha Yesufu.

“Caution: this account is temporary restricted. You are seeing this warning because there has been some unusual activity from this account,” the notification read on Thursday.

Mrs Ezekwesili, in several tweets on Thursday, urged Twitter to release the suspended account, saying Yesufu was only holding the government accountable.

“AishaYesufu is a pain only to those who wish to shut down the Voice of Citizens. She does not deserve the Twitter ‘Temporary Restriction’ at all. Release Aisha’s account, please. Do not cooperate with @NigeriaGov and allies to further repress citizens’ right to Voice. Don’t!” she said.

Ezekwesili, also a co-founder of BBOG before she resigned to pursue her presidential ambition, attacked the Federal Government for the suspension.

“The FG NigeriaGov NGRPresident MBuhari has YeleSowore unconstitutionally detained for more than 3 weeks to shut down his Voice. AishaYesufu‘s Voice expressed daily on Twitter is being shut down with the unwitting action of a ‘Temporary Restriction’. FG, this won’t work,” she said.

About 276 schoolgirls were kidnapped from a school in Chibok Local Government Area of Borno State on April 14, 2014.

Some 60 managed to escape from their abductors while the Federal Government has only been able to negotiate the release of 107. More than 100 other girls are still unaccounted for.

Also, Leah Sharibu and about 110 other students of Government Girls Science and Technical Secondary School, Dapchi, Bursari local government area of Yobe State were kidnapped on the night of February 19, 2018.

Yesufu has been very vocal in her criticism of President Muhammadu Buhari’s administration and his handling of the kidnap of Chibok girls and others who are still in Boko Haram captivity. 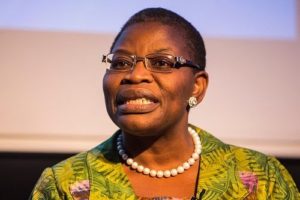