Ole Gunnar Solskjær says he does not fear the sack as Manchester United manager despite Unai Emery, Quique Sánchez Flores and Mauricio Pochettino recently being removed from their jobs.

Solskjær has won only four of 14 league matches this season in United’s worse start since 1988-89. The Norwegian was asked whether, given the removal of Emery by Arsenal, Flores by Watford and Pochettino by Tottenham, he was concerned he could follow.

‘No, it doesn’t make me more concerned,” he said. “I’m just focusing on my job and that’s doing as well as I can [and] look forward to the next game, and look at long-term planning things with the board.

It’s that time of year and never nice to see your colleagues lose their job in a very short space of time.

“We’ve had too many draws (six) for my liking, defeats too of course. But draws we should have turned into wins and football is a results business. We’re not happy; we can do better and are working hard. The work we do is always geared on us improving but we’re not getting all the results we’ve deserved.” 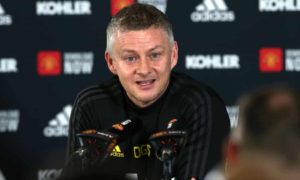