At a meeting in his residence in Akure, Abegunde implored members of All Progressives Congress (APC) in the state to close ranks and return Akeredolu to enable him provide the people with more dividend of good governance.

“This meeting is called to awaken us from slumber and to energise us. There must be regular meetings, at least, once every month, because meeting is the engine of any political party.

“Election is coming next year and we, as drivers of the party, must get prepared for the party supporters outside there who rely on us.
“We are doing it in order to give full support to our Governor, Oluwarotimi Akeredolu (SAN), for his continuity.

‘’His Four-plus-Four project is our project and we are working on it, driving it to be successful,” he stated.
According to the SSG, the governor had done well and his achievements would earn him a second term in office.

“I, as an experienced politician, who has worked with three different governors of the state, can boldy say we have never seen a governor so passionate about the welfare of his people, like him.
“He has performed very well. Infrastructural development is obvious across the state and the roads being done by this administration can stand the test of time.

“He has renovated public primary schools across the state as well. In fact, this is the first time that we are serious in the state about industrialisation.
” In Ore, the southern part of the state, an ethanol plant is already producing along with other industries there,”Abegunde said.

According to the SSG, the governor will attend to other needs of the people being yearned for.
He also assured the party members that their welfare would be taken care of soon, adding that the governor was committed to developing Akure and environs.

Chief Olu Ojo, the Chairman of APC in Akure South Local Government Area, pleaded with the party members to work to bring the party together, saying that love was needed to actualise it.
Ojo enjoined them to put behind, all past issues, and move the party forward towards actualising the re-election bid of the governor.

“As you know, the SSG is not a man of deceit, and he has always led us in the right direction.
“So, let’s hold him to the promise that Gov. Akeredolu will address our concerns and that we have to work for the four-plus-four project of the governor,” Ojo said.

Speaking, Olajide Sunday Hon David member representing Akure Constituency 2, in the State Assembly, thanked the SSG for initiating the meeting.
Olajide said that party politics had started again in the state, tasking the party faithful to work together as one toward the 2020 governorship election, despite their grievances. 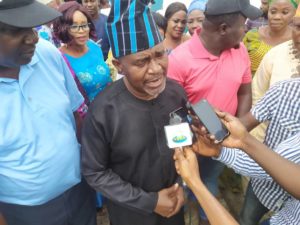