Prof. Itse Sagay (SAN), Chairman of the Presidential Advisory Committee Against Corruption (PACAC) on Tuesday said only a mentally slow person will proclaim that the North will remain in power forever.

Speaking in a chat with Daily Independent, Sagay said for the sake of peace the unwritten agreement of power rotation between the North and South after eight years must be adhered to.

According to him, power must shift to the South in 2023 after President Muhammadu Buhari must have completed his tenure in 2023.

He said anyone thinking of truncating that arrangement is interested in the break-up of Nigeria.

“No rational mind will say things like that. Only an ethnic jingoist or a person who is mentally slow and who does not have the interest of the country at heart will utter such a statement. That statement can only come from somebody who wants us to break apart”.

“No sane person will talk in such an irresponsible manner. The mode of exercise of power and choice of presidency has been established. Every eight years, it moves from the North to the South and from the South to the North, depending on which region was in power at the particular time”.

“If anyone thinks he can change that, then that person does not consider the future of Nigeria. The country cannot survive any idea of a group of people in the North or South saying they will remain in power permanently without respecting the rotation rule” he said. 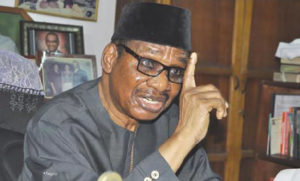