Taking Nigeria as a case study, if you are not a Jehovah’s Witness, you must have heard from some pastors or some other Christians like you about how the Jehovah’s Witnesses teach the wrong gospel. You must have heard them say that they use the wrong Bible. They must have told you to kick them out of your house or never let them in. They might have even told you that listening to them could lead you to Hell Fire.

My view about them changed when I related with one of them during an external tutorial class. There was a single guy among the rest in a mixed class of Christians and Muslims. This guy was the only Jehovah’s Witness. We all had a lot of fun bullying him. We made jest of his bag and made jest of the fact that he was a Jehovah’s Witness.

Despite all these bullying, he never retaliated. We were still kids back then and our knowledge of the Bible was what we were taught in our different churches. We argued over some verses in the bible and the guy took pains to explain some topics based on what he had been taught. We all shut him down, of course.

Years later, I had the opportunity to visit one of their Kingdom Halls. I had read a lot of their FREE publications and I wanted to see what they did there. I was wowed. I have been to many other churches but this Kingdom Hall was different.

The surprising part was that after the service, I met this guy again and he was so happy to see me. I was surprised. I thought he would make jest of me and ask why I was there. Instead, he and the other people there showed me love.

How are the Jehovah’s Witnesses better Christians than the rest of us?

The Bible says “Blessed are those who are persecuted because of righteousness, for theirs is the kingdom of heaven”- Matthew 5:10

2 Timothy 3:12 – “Blessed are you when people hate you, when they exclude you and insult you and reject your name as evil, because of the Son of Man.”

You will agree with me that Christians in Nigeria also get persecuted but the persecutions occur mostly in the Northern part of Nigeria. Jehovah’s Witnesses, however, are many all over the world and they are persecuted more than all other Christians of different denominations. The recent one occurred in Russia.

The Southwestern part of Nigeria, which is full of the Yorubas is considered to be full of people who are tolerant and accept you into their society no matter your status or religion. However, Jehovah’s Witnesses still get persecuted there most of the time.

I watched an American movie about the Second World War and at the end of the movie, some statistics were listed based on the number of people who were killed by Hitler’s Soldiers. Apart from the Jews, the homosexuals, and blacks, I was surprised to see Jehovah’s Witnesses listed among them too.

Unlike in other Christian churches where people are forced or even threatened to make donations, donations in Kingdom Halls of the Jehovah’s Witnesses are quite voluntary. When you walk into one of their Halls, you will see a box right at the entrance calling you to make voluntary donations.

In each Kingdom Hall, at least the ones I have been to, there is a special place where lots of books and publications are arranged. You can pick any book depending on the language you want for free.

You might have seen them giving out books on the streets and they would never ask you to buy them. They would instead ask you to make voluntary donations. Even if you don’t have money, you can go ahead and pick. They are more interested in making sure you gain the knowledge of God’s word.

Do you know a Jehovah’s Witness who doesn’t ‘preach’ on social media? When Jesus was leaving the earth, he asked his disciples to go all over the world and preach the gospel.

Thankfully, we are in the jet age where you can share information that can reach people all over the world. Unfortunately, today’s Christians rarely make use of this opportunity to preach the gospel.

There are lots of Christians who have huge followers on different social media platforms but unless they are pastors, you would rarely see them post anything related to the gospel on their accounts. Instead of sermons you will see them posting their beautiful pictures.

Other Christians prefer to share nonsensical topics and topics that won’t touch your life positively in anyway. They are supposed to share the sermons they learn from their different churches every Sunday but they would rather share posts concerning Big Brother Nigeria or other nonsense.

This is one of the things they are known for. Apart from the social media, radio and other modes of evangelism, the Jehovah’s Witnesses preach the gospel by walking from house to house.

Despite the fact that a lot of people reject them, they still keep on. Everything in their minds is looking for one or two people whose lives they can touch positively. You see them walking in the sun, with their umbrellas and bags, with no shame. They prefer to follow God’s instructions and they do this at least twice in a week, walking long distances.

Other Christians testify about the new cars they just purchased, the new child they just had, the new house they just built and so on. The testimonies of Jehovah’s Witnesses involve turning over a new leaf, giving their lives to Jesus and becoming a model example.

They have different stories on testimonies like these. When you read about people changing and turning over a new leaf, you will be encouraged and you will want to have the same experience. In one of their publications, I read about a Japanese Kamikaze soldier who fought in World War Two and then became a Jehovah’s Witness and began to preach the gospel. I was wowed.

6. THEY ARE ORDERLY AND CALM

Have you ever walked into a Kingdom Hall? As you approach the place, you would believe they are not holding any program because you won’t hear anything. It is only when you enter into the Hall that you will realize that there is a program going on after all.

Other churches love the use of loud speakers. You could be far away and you would hear the different speakers from different churches booming and screaming. Jehovah’s Witnesses’ Kingdom Halls do not pollute the air with noises.

During their programs, they never compete for Bible reading. We all know this. In Pentecostal churches, when the pastor calls a Bible verse, you see fifty people trying to read the same verse at the same time. You would think the fastest reader would be paid for it.

The ‘winner’ is usually the fastest reader. This usually causes fracas among the readers after church services and you may sometimes see two ‘readers’ keeping malice against each other.

The reverse is the case in Kingdom Halls. When a Bible verse is called or when a question is asked, people would raise their hands in order to respond. Everything is calm and quiet. You feel peace in your heart. You forget your problems.

Many churches in Nigeria love to welcome newcomers. Some churches serve them foods and drinks and collect their phone numbers. The choir members sing a song of welcome and then some top leaders of different groups walk over to the newcomers to shake their hands and welcome. That’s all.

At the end of the program, everyone leaves and forget the newcomer. This occurs in most churches. When a newcomer’s phone number is gotten, all the church want to do is to make sure the newcomer becomes a member and comes always.

In Kingdom Halls, this is different. After the service, almost everyone walks over to you to shake your hand and welcome you with beautiful smiles. Then they politely ask if you would want free Bible study.

There are so many other ways by which the Jehovah’s Witnesses are better Christians than the rest of us and we need to emulate these qualities. There is a very big difference if we are being sincere with ourselves.

Showing love to one another is the key to peaceful nation. Despite the number of churches in Nigeria, in different states and in different streets, corruption is still rampant. Ethnic bigotry and tribalism is till rampant. Something is wrong somewhere and it is all in our hands to change things.

Emulating the qualities of the Jehovah’s Witnesses is the key. 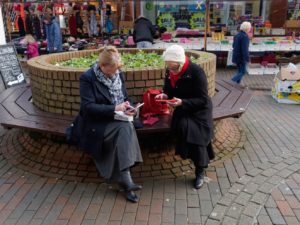