National chairman of the All Progressive Congress political party, Adams Oshiomhole supporters have releases video of the incident which happened at Iyahmo, Edo state.

They claimed the incident was a clash of supporters. Writing on social media, Gloria Adagbo Oshiomhole’s supporter said;

“Here is a VIDEO of THUGS IMPORTED TO IYAHMO chanting 4+4. Why import thugs to a non political event? Why import thugs in the first place?
The event in Iyahmo was an academic one, not political. Why import thugs from Benin to the Convocation venue? Worst still why carry the thugs to the National Chairman’s house and expect his own people not to react?
What happened was simply a clash of supporters. You don’t carry your supporters and thugs to my compound to show your political strength. It should never be allowed or condoned.
Pursuing second term bid is okay but don’t go about it the wrong way. WIN THE SUPPORT and TRUST REQUIRED. It mustn’t be turned into a DO or DIE affair. You can be governor today and when you tenure is finished, what will you be remembered for? What would be your legacy? Governors will come and go, Edo State will Remain. God bless our people and country. This will pass, and soon too!!” 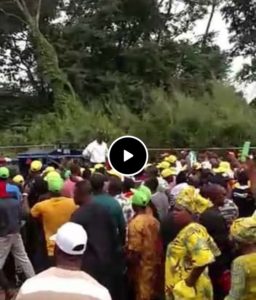