The striker will become the first female African to play in the Spanish rivalry between the famous clubs.

Asisat Oshoala is eyeing to make history as she is set to feature in the maiden Women’s El Clasico as Barcelona take on Tacon in a Liga Iberdrola clash on Saturday.

The encounter scheduled for Estadi Johan Cruyff will see 2019 Uefa Champions Leaguefinalist Barcelona face-off with newly-promoted CD Tacon, who were recently taken over by Real Madrid.

With its name and branding set to be adopted in 2020, Real Madrid who had no women’s side will technically rekindle the men’s rivalry as they battle the four-time title winners for the first time.

Barcelona will rely on over 30-years of top-flight experience plus quality signings, including 2017 Best Fifa Women’s Player Lieke Martens and 2015 BBC Women’s Footballer of the Year Oshoala.

For Oshoala, it will be a dream come true to become the first African to play in the maiden Spanish women’s El Clasico after securing a permanent deal with the Catalans this summer.

Having celebrated her first silverware in Spainin August, the three-time African Women’s Footballer of the Year will aim to continue where she left during pre-season against Tacon.

Even though the match is not likely to be rated as the biggest women’s football rivalry yet, with the dominance of Barcelona and defending champions Atletico Madrid, it’s a start of things to come.

Heading into a debut top-flight outing, Tacon will face a mountainous task, beginning at Barcelona.

And the Nigeria international, who just returned from leading her country to the Olympic qualifying third round, will be keen to replicate her red-hot pre-season form with eight goals in five games. 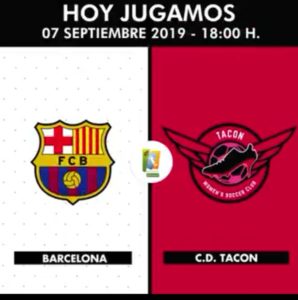