Nigeria forward,Victor Osimhen’s market value has risen from €27m to €40m according to Monday’s update by Transfermarkt a German-based website that has footballing information, such as scores, results, statistics, transfer news,fixtures and player values.

The Super Eagle’s market value,according to the website rose by €13m because of his transfer to Napoli in the Serie A from Ligue 1 side, Lille late last month to make him the second most valuable Nigerian player after Leicester City midfielder, Wilfred Ndidi whose market value also rose from €36m to €45m.

“Although no matches took place in France since March, many players are linked with moves to bigger clubs. In order to take this into account, the market value update primarily revalued talents who have been in demand in recent weeks,” wrote the website.

Osimhen shares third place in the ranking of the most valuable Ligue 1 strikers with Wissam Ben Yedder (Monaco) and Moussa Dembélé (Lyon).

Before the season was terminated prematurely, the L0SC striker performed well and attracted the interest of Napoli.

Osimhen’s deal is worth €80m of which €70m will be paid over five years and €10m in bonuses related to results.

His contract will start at €4m for the first year and run for five years. It will increase year by year until €4.5m. 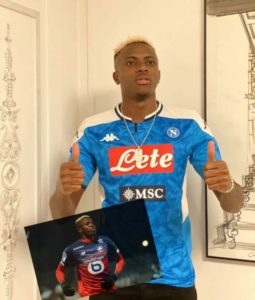