Vice President Yemi Osinbajo, SAN, is completely baffled by a statement credited to Chief Olabode George, a former Deputy National Chairman of the PDP to the effect that he had forgiven the VP for his alleged role in his (Chief George) incarceration for alleged contract splitting during his tenure as Chairman of the Nigeria Ports Authority, NPA.

According to the Vice President, “ I honestly hope that this is fake news and the product of some mischief as the entire story is a complete fabrication.“

However, it is now important to set the records straight as follows, in rebuttal of this amazing falsehood!

1. Chief Olabode George’s trial commenced in August 2008, a year after Prof. Osinbajo left as Attorney-General of Lagos State. ( He served as Attorney General from 1999 to 2007.) Chief George was convicted by the High Court in 2009.

2. Chief Olabode George was charged to court by the EFCC, a Federal Government agency, not the Ministry of Justice, Lagos State. Chief George’s party, the PDP was in office at the center in Abuja at the time.

3. Chief Olabode George was charged under Sections 104 and 203 of the Criminal Code. The Code has been in force since 1914! Indeed both provisions have been in the Code since then. Every State in the South of Nigeria cites it as it’s own law.

Prof. Osinbajo clearly could not therefore, as Chief George alleged, have “connived with Tinubu to draft the unknown law that was used to convict him”. Neither Prof. Osinbajo, Asiwaju Bola Ahmed Tinubu, nor the House of Assembly, Lagos State passed any new Criminal law. In any event, their tenure ended a year before he was charged to court.

The other law that came up at the Supreme Court, “The Public Procurement Act 2007,” is an Act of the National Assembly, not a State law.

4. The Vice President never met Chief Olabode George on any flight within or outside Nigeria. He also never had a discussion with him on his conviction or incarceration on any flight or at any time . Indeed the only interaction the VP had with Chief George since his incarceration was in 2017 at the 50th Anniversary Celebration of the founding of Lagos State, where the VP was guest of honour . The VP greeted him where he sat with other elders of Lagos State. There was no discussion whatsoever in that brief encounter.

It is hoped that these claims were only falsely credited to him, otherwise one would have to wonder how he came about such an outlandish fiction, complete with a meeting on a flight that definitely never happened! 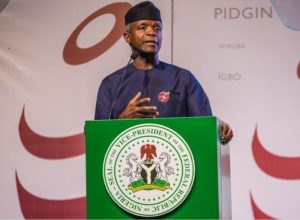