The Independent National Electoral Commission (INEC) has expressed its readiness to assist its counterpart from the Republic of Chad to conduct free, fair and credible parliamentary elections.

He commended Djibert for acknowledging Nigeria’s support to Chad’s electoral process and democracy in the recent past
Yakubu pledged that the INEC would work within its powers to offer technical assistance in certain areas for the conduct of the elections.

“Both at this meeting and in our private discussion in the office, you raised a number of issues and I want to respond as follows.

“The first issue is insecurity resulting in the displacement of citizens including voters.

“One area we can share the experience with the Republic of Chad in this regard is to share with you our framework for Internationally Displaced Persons (IDPs) voting.

“The second area is in the registration of voters and the preparation for voters register; we will share the experience with you in this regard as well.

“We will also share the experience with you in deepening stakeholders’ engagement, particularly with respect to Political parties, civil society organisations, and the Media.”

“As you prepare for the parliamentary elections, one important area we will discuss is inclusivity for women, youths, and persons with disabilities,” he said.

Yakubu said that for material assistance, it was entirely a bilateral matter between the Chadian and the Nigerian governments.

“I am happy that the man in charge of our embassy in chad is here. If there is anything we can do to facilitate this we will do so.

“Arising from the meeting, I want to propose that we set up two technical teams from the two countries’ electoral bodies.

“We will be very happy to welcome the team from Chad to come and understudy our processes and procedures in Nigeria.

“On your request, we will also be happy to send a team of experts from Nigeria to see how we can further collaborate.

“Be rest assured that if there is anything of value that you think Nigeria can share with the Republic of Chad for the purpose of organising free, fair and credible elections, consider us your friends and brothers.

“We will support you in any way that we can,” Yakubu said.

Speaking earlier, Djibert solicited the supports of Nigeria in the conduct of its forthcoming parliamentary elections.

Djibert said that present parliamentary members of Chad, whose four years tenure was supposed to end on June 21, 2019, had practically completed two tenures.

This, according to him, was due to some problems including insecurity, especially Book Haram facing the country, which made Chad close its borders with Libya, Sudan, and the Central African Republic, while declaring a state of emergency in those borders.

Djibert said they were in INEC to appreciate the good bilateral relationship between Nigeria and Chad, the presidents of the two countries, as well as Nigeria’s previous interventions in the past elections in Chad, especially in 2016.

He said that Nigeria had to be the first country to intervene in different forms of supports for the elections in Chad.

“We have considered Nigeria as a brother. That is why we still turn our face to you and in that respect to seek for your assistance for the conduct of elections in Chad.

“We understand that Nigeria is participating in the UN basket fund, but as I am talking, I want to make it clear that none of the countries, not even organisation, has come to help the Republic of Chad.

“We have received some promises from the European Union, but up till now, there is nothing tangible from there.

“Now we have taken the matter to a bilateral electoral relationship. That is we have turned you.

“Just as you have done in the past, we are sure that Nigeria which used to do so will come to assist INEC in the Republic of Chad.”

Djibert said that Nigeria has always extended assistance to Chad and other sister countries.

Nigerian Charge d’Affairs to Chad, Mr. Nasiru Waje, who was part of the delegation, commended the good relationship between Nigeria and Chad and their presidents.

He pledged to consult with his principal in the Ministry of Foreign Affairs to see how Nigeria could assist Chad. 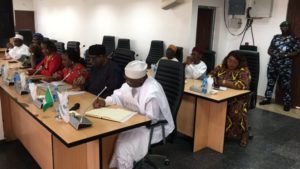