Paul Pogba has marked Ramadan, the Islamic holy fasting with a trip to the pilgrimage city, Mecca.

The 26-yr-old has made the trip at the end of each of the last two Premier League campaigns.

Pogba who could be on his way out of Old Trafford soonest was joined on the trip by Everton’s Kurt Zouma.

The Frenchman posted pictures from the holy city with the caption: “Never forget the important things in life.”

The former Juventus man has previously been to Mecca on Hajj – a journey every follower of Muhammad and Islam as a religion is supposed to take in their lifetime.

Paul has made the pilgrimage trip at the end of the season rather than jet out to his favourite vacation spots such as Las Vegas in the United States and Ibiza in Spain. 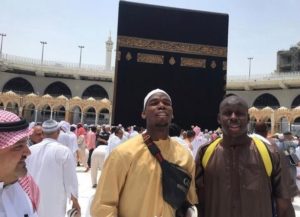