The flags of the Peoples Democratic Party have been removed from the Imo State Government House in Owerri, the state capital.

This is coming a few hours after the Supreme Court sacked Emeka Ihedioha and declared Senator Hope Uzodinma of the APC as the duly elected governor of the state on Tuesday.

When our correspondent inquired, a government house source said that the flags were brought down because a new governor had emerged.

This is even as banners congratulating the governor-elect adorned the entrance gate of the state government house.

Our correspondent saw a banner by the United Bank for Africa congratulating the governor-elect placed at the entrance of the state government. 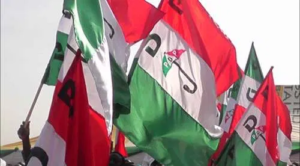