Members of the Indigenous People of Biafra (IPOB), reportedly assembled on Japan in anticipation of the visit of President Muhammadu Buhari following the order given by Nnamdi Kanu, the leader of the group to ensure his arrest

President Buhari is billed to attend the Seventh Tokyo International Conference on African Development (TICAD7), which will take place in the City of Yokohama from August 28th to 30th. He is expected back on August 31.

A statement by the Special Adviser to the President on Media and Publicity, Femi Adesina, states: “President Buhari will deliver Nigeria’s Statement during Plenary Session Three in which he will appraise Nigeria-Japan relations and takeaways from TICAD6.”

In seperate messages, Kanu had earlier ordered IPOB family units in Japan to ensure Buhari is disgraced as he steps into the country on Sunday for the conference, adding that Japanese Law does not encourage impostors to parade in its country.

He later extend his call to all Nigerians, including the Igbos (Biafrans), Yorubas, Hausas and Middle Beltans to come out emass to ensure “Jubril” is arrested and handed over to Japanese Authorities for investigation.

He said this shortly after members of the group attacked former deputy senate president, Ike Ekweremmadu in Nuremberg, Germany, at a New Yam festival event.

Meanwhile, Kanu said to have forwarded a letter to the Emperor of Japan, Naruhito over his claim on impostor Jubril, the dual version of Nigerian President, Mohammadu Buhari. 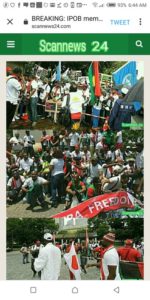