Enugu State Governor, Rt. Hon. Ifeanyi Ugwuanyi, today participated in the Armed Forces Remembrance Day celebration, held nationwide every 15th January, to pray, honour and recognize those who laid down their lives and made the ultimate sacrifice for the peace and unity of the country.

Highlights of the annual event, include inspection of parade by the governor, Christian and Muslim prayers, laying of wreaths in honour of the fallen heroes, 21-gun salute, release of pigeons, among others.

Below are some colourful images from the event.

Enugu State is in the hands of God! 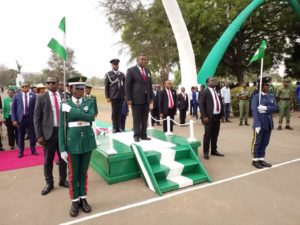