Danjuma, who spilled the beans on his involvement in the deal, told Businessweek magazine in an exclusive interview that the gas flaring project was originally his idea, and that it was one of his companies, Tita-Kuru Petrochemicals Ltd, that had spent $40million preparing it, not co-founder of P&ID, Michael Quinn.

According to him, Quinn had been a consultant to him, using his funds and office space.

General Danjuma was said to have been upset when Quinn applied for the contract himself instead of using his firm in line with the original concept.

“The realisation dawned that my consultant was going to steal my project”, the magazine quoted the former defence minister as saying.

Danjuma recalled being promised a share of P&ID in return for his initial investment, adding however that he hadn’t heard from the company in years and that Brendan Cahill did not reply to letters about the lawsuit. Cahill is Quinn’s surviving partner who took Nigeria to court over the failed project.

“At one point, Danjuma dusted off his hands to emphasize the relationship’s end,” the report noted, adding that P&ID’s spokesperson declined to comment on Danjuma’s involvement or any other matters raised in the story.

Similarly, Cahill was said to have refused to respond to attempts to contact him directly.

The federal government had vowed to investigate the project that led to the court judgement, which many experts have described as a bloated fine slammed on the country.

Financial experts insist that any attempt to immediately cough out the fine of $9.6billion (over N3tn) would invariably deplete the country’s foreign reserves base, which the CBN seemingly depends on to defend the naira exchange rate.

The federal government had earlier made its stand known on the said judgement at a press conference in Abuja on August 28, 2019.

At the conference, the government team comprising the Attorney-General of the Federation, Abubakar Malami; the minister of Information and Culture, Lai Mohammed; the minister of Finance, Zainab Ahmed; and the CBN governor, Mr. Godwin Emefiele, individually shared their perspectives on the issue.

The country’s Solicitor-General, Mr Dayo Apata (SAN), who was also at the press briefing, confirmed that he had been directed to appeal the UK commercial court ruling, that the P&ID “can seize Nigeria’s assets worth over $9bn as compensation for the breach of the 2010 agreement”.

Apata also expressed optimism that Nigeria would succeed in its appeal to seek a stay of execution of the recent judgement.

On his part, Malami suggested that there was a need for “a comprehensive investigation to identify everyone who signed the contract agreement to supply a product that they did not produce!”

Consequently, he insisted that “insinuations abound that the contract was originally designed to fail, fundamentally because there ‘were’ inherent elements of hitches that were (deliberately) designed into the agreement right from inception.”

Finance minister Ahmed, on her part, also noted that the $9.6billion award is actually equivalent to N3.5trillion, an amount, which, she claimed, would cover the federal government’s total personnel cost estimated at about 3.2trn in the 2019 budget.

Invariably, the immediate settlement of the P&ID’s $9.6bn award would compel further debt accumulation to cover government’s spending on both recurrent and capital expenditure accounts.

Arguably, however, with present concerns about the subsisting N24.4tn national debt burden, which already gulps about 40 per cent of government revenue, to service a fresh foreign loan of $9.6bn annually to pay the P&ID award may not be the right option!

Interestingly, Emefiele held at the joint briefing, on the P&ID award, that the apex bank does not have any information in its records “to show that this company brought in one cent into this country and we have accordingly written to the Economic and Financial Crimes Commission and the Intelligence Department of the Nigeria Police, who are currently investigating this matter.”

Mohammed chorused Malami’s suspicion that the agreement process was carried out with some vested interest in the past administration, “who”, according to him, “apparently colluded with their local and international conspirators to inflict great economic injury on Nigeria and its people.”

Despite the arbitration award and the ruling on enforcement in August 2019, Mohammed gave assurance that Nigeria was not about to lose any of its assets to the P&ID.

Besides, he noted that “the enforcement of the award cannot even commence until the UK courts resume from annual recess in September to address Nigeria’s appeal.”

Meanwhile, one John Ehiguese, who is the Nigerian representative of the P&ID, has confirmed that their legal team is working diligently to identify and target enforcement of the tribunal’s award against Nigeria.

There are speculations that the P&ID could target Nigeria’s reserves in foreign banks, as well as oil cargoes anywhere in the world.

Fortunately, Ehiguese also suggested that the Irish firm had not ruled out the possibility of alternative resolution of the fine, but noted, however, that the onus was upon Nigeria’s government to show good faith and enter into reasonable negotiation. 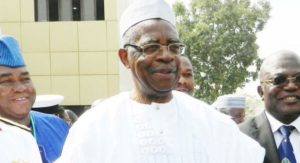