A plane crashed into an American house in Colonia, about 22 miles from New York City, United States.
Luckily, there was no one in the house as the blast caused a heat and fire damages.

The fire extended to adjacent houses but a woman in one of the houses was able to escape without any injury. No passenger was recorded onboard the plane while police were still in search of the pilot.

A resident in the area told ABC News that he could not believe such a thing can happen in area like theirs.

The crashed plane reportedly took off in Virginia and was planning to land in New Jersey, according to police. 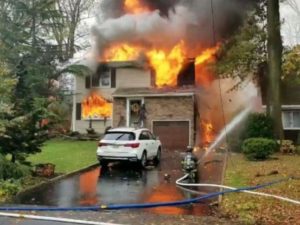