The Presidency may take over the management of the Niger Delta Development Commission (NDDC) from the Ministry of Niger Delta Affairs, as the power play among stakeholders in government may not allow the Commission to function optimally.

The NDDC was hitherto in the Presidency before the Minister for Niger Delta Affairs, Senator Godswill Akpabio, requested for its transfer from the Office of the Secretary to the Government of the Federation (SGF), to his Ministry.

President Muhammadu Buhari had in his October 1, 2019 national day broadcast attributed the redeployment of the NDDC from the Office of the SGF to the Ministry of Niger Delta Affairs to the commitment of his government to enhance the living standards of communities in the Niger Delta, through coordinated and appropriate programmes.

Barely 24 hours after his swearing-in as the Minister, Akpabio wrote a letter to the President on August 22, 2019, requesting for the supervision of the NDDC and that it should be transferred to his ministry.

The request letter with reference number MNDA/PRD/114/S.I/T/119, was granted via another letter (reference number SH/COS/81/A/1900) by the Chief of Staff to the President, Abba Kyari, on September 2, 2019.
But Presidency sources revealed that the Commission may not achieve its objectives under the Niger Delta Ministry due to the vested interests exhibited by some powerful politicians in government.

According to the sources, the fight over the control of the NDDC is between some Niger Delta Governors, Akpabio, his counterpart in the Transportation Ministry, Rotimi Amaechi, Minister of State for Petroleum, Timipre Sylva, the Deputy Senate President, Ovie Omo-Agege and the National Chairman of the All Progressives Congress (APC), Adams Oshiomhole.

Sunday Independent gathered that while Omo-Agege and Oshiomhole had prevailed on President Buhari to send the names of the new board members to the Senate for confirmation screening, Akpabio countered immediately by inaugurating a three-man Interim Management Committee to oversee the management of the Commission.

According to him, the Committee would be in place to create the necessary ambience for a hitch-free forensic exercise, adding that the inauguration of the Board Members would be put on hold until the forensic exercise is completed.
He directed the Acting Managing Director Dr. Mrs Enyia Akwagaga to hand over to the new Interim Committee on Wednesday, October 30, 2019.

“The President’s directive on forensic audit was the opportunity the governors and Akpabio seized to act fast as the forensic audit will last for a minimum of 10 months. The interim board has to be there for same period. The list of board members sent to the Senate is a baby of Omo-Agege, Oshimhole and Sylva”, said a dependable source.

Another strategy, according to the source, is that within the period of the audit, aggrieved stakeholders would have ample time to seek legal scrutiny of the law and ask that the new board members be inaugurated to supervise the forensic audit.

It added further that “Akpabio appears to be alone on this forensic audit matter because he didn’t tell the world how he engaged the accounting firms. Such a move has to be engaged following a due process, at least the governing council resolution must suffice”.
Sunday Independent was also made to understand how the interim board members emerged.

Nunieh, the Acting Managing Director is said to be a friend of the First Lady, Aisha Buhari, and an ally of Amaechi. Cairo Ojougboh, the Acting Executive Director, Projects is from a prominent politician and businessman from Delta State, Olorogun O’tega Emerhor.

Our source also confirmed that heads will roll at the NDDC should the forensic audit take place because most senators and influential politicians are involved in the previous looting of the commission.

“A prominent politician from Bayelsa State and a serial gubernatorial aspirant is already seeking a soft landing to join the APC from PDP and evade the hammer because he is the longest serving executive of the NDDC since inception” he said.
Sunday Independent investigation also revealed that Akwagaga was merely sacrificed to pave the way for “a free sleaze” by political scavengers.

An impeccable source confirmed that a certain influential politician in the Niger Delta region was said to have demanded for the sum of N30 billion as the cost of dredging a canal that causes flooding in one of the oil producing states.

“They wanted N30 billion to dredge a canal that causes flooding in one the NDDC states. They also promised a N1 billion kickback in appreciation”, the source said.

He added that the forthcoming governorship election in Bayelsa State on November 16 has been attributed to the reason why there is a sudden change of baton in the leadership of the Commission.

The same source hinted that “APC is bent on snatching one more state from the PDP’s grip in the Niger Delta to strengthen its chances of taking over the region, if need be. On that note, anything worth doing, must be done including draining the Commission of cash, if need be, just to get Bayelsa State.”

“They also want a source where they can pull out money to fund the Bayelsa State governorship election. This is the problem we have in this country. We don’t appreciate the best”, the source cried out.

Meanwhile, Akpabio has come under strident attacks by other stakeholders in the Niger Delta over his flagrant disobedience of presidential directives and overbearing conduct over the NDDC.

A body which styled itself as ‘Forum Of APC State Chairmen’, called for the sack of Akpabio as Minister of Niger Delta Affairs.

The Forum which has Hon. Ali Bukar Dolari and Dr. Ben Nwoye as Chairman and Secretary, respectively, said in a newspaper advertorial, that Akpabio “is a clog in the wheel of progress that hasn’t imbibed the culture of progressives ideologies but concerned about promoting illegalities and indiscipline because of vested interests to annex the NDDC as a unit of the Niger Delta Ministry where he is the Minister”.
Also, the Ijaw Youth Council (IYC) has called for the immediate sacking of Akpabio, over his interference in the affairs of the NDDC.

A statement signed by IYC President, Eric Omare, and made available to journalists, said the activities of the former governor of Akwa Ibom, since his appointment as Minister of Niger Delta Affairs, have led to instability and confusion in the region especially, with respect to the management of the NDDC.

“We make bold to state that Akpabio’s intention in setting up an interim management committee with one of his political loyalists, Chief Ibanga Bassey Etang, as Acting Executive Director, Finance and Administration is at the expense of the development of the Niger Delta region.

“The IYC is wondering if Chief Akpabio is Minister of NDDC or the Niger Delta Affairs. Why is Akpabio more interested in the NDDC instead of coordinating the overall development of the Niger Delta region, especially the completion of the East Road Road that has been abandoned since President Buhari assumed office?”

The IYC, therefore, called for the immediate sack of Akpabio as Minister of Niger Delta Affairs in the interest of relative peace in the Niger Delta region.

The body of Ijaw youths worldwide also called for the reversion of the order granting the Ministry of Niger Delta Affairs supervisory powers of the NDDC.

Efforts by Sunday Independent to speak with Akpabio and his Minister of State, Senator Tayo Alasoadura, on the issues were unsuccessful since Thursday, as they neither picked telephone calls, nor responded to WhatsApp messages sent to them. 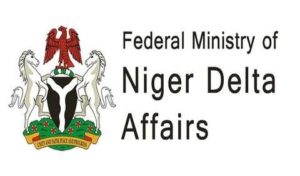