Buhari, who gave the warning at the inauguration of ministers at the Presidential Villa, stated that they must work in harmony with their fellow ministers, Igbere TV reports.

He also charged the ministers not to allow political or ethnic differences to affect their performance.

“We can only make meaningful progress in our restoration efforts if we all commit ourselves to addressing the challenges confronting our nation in the best interest of our people and posterity.

“We must not allow issues such as political affiliation, sectional interest, and primordial loyalties to blind us against our patriotic obligation to drive our nation’s growth, development, and prosperity in an atmosphere of enduring peace, security and stability,” he said.

The president explained that the ministers, as heads of their respective ministries, and for effective implementation of their mandates, are required to work closely with the Permanent Secretaries and heads of Agencies under their purview.

He said this had become necessary considering the fact that, the task of moving the country to the Next Level required dedicated, focused, and collective efforts.

“I must emphasise the importance of communication and harmony within our government.

“You must work in harmony with your fellow Ministers. Communication, vertical and horizontal, can only be ignored at a price,’’ he said.

According to the president, his administration’s primary business in the next four years is to work towards delivering dividends of democracy to all citizens irrespective of their socio-political affiliations, Igbere TV reports.

He said the All Progressives Congress (APC)-led Federal Government was determined to record more successes that would meet the expectations of citizens.

He said: “Our primary business over the next four years is to work together towards delivering the results that the people of Nigeria expect from us.

“We have a great opportunity as an administration to build on the progress already made, in order to build and fundamentally shift Nigeria’s trajectory to the path of steady growth and development.

“Our economic policy, which is the Economic Recovery and Growth Plan, is still robust and on course with the necessary policies and initiatives to sustain the country’s exit from recession, engender growth and promote the value chain of infrastructure development.

“We believe that we can sustain our legacies and developmental strides if they are based on sustainable policies and good governance.’’

The President informed the Ministers that their performance and that of their various ministries would be tracked, to guarantee efficiency.

“As you are aware, the Federal Executive Council meeting is held on a weekly basis.

“As part of efforts towards ensuring effective delivery on our priorities, I have directed the Secretary to the Government of the Federation to track progress against what we have committed to do to achieve these objectives.

“He is therefore expected to report the process of implementation and outcome to the Federal Executive Council,” he added.

In short remarks at the event, the Secretary to the Government of the Federation Boss Mustapha, who was the first to take his oath of office, urged the ministers to familiarise themselves with their respective permanent secretaries.

Mustapha said this had become imperative in view of the fact that the executive arm had pledged to submit 2020 appropriation bill to the National Assembly by September.

“You are expected to familiarise yourselves with the permanent secretaries of various ministries and within this period, set out to work particularly on the budget.

“And taking cognisance of the fact that we have assured the National Assembly that we are sending the budget immediately they return from recess,’’ he said.

Buhari had earlier on Wednesday, sworn in 43 ministers, in nine batches of five each. 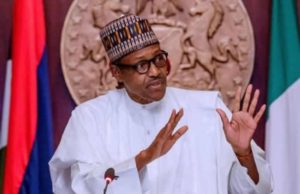