The Coalition of United Political Parties (CUPP) has alleged plot by the All Progressives Congress (APC) to influence the selection of Supreme Court justices who would sit on the appeal panel filed by the Peoples Democratic Party (PDP) and its presidential candidate, Alhaji Atiku Abubakar. Also, a coalition of Civil Society organisations, the Nigeria Centre for Justice and Rule of Law (NCJRL), accused the Chief Justice of Nigeria (CJN), Justice Ibrahim Tanko Muhammad, of shopping for willing justices who would hear the appeal. At a press conference yesterday, CUPP spokesperson, Ikenga Ugochinyere, said the coalition has intercepted a secret list of a seven-man panel of the Justices of Supreme Court about to be announced by the CJN who would sit on the appeal. According to him, the plan was to jettison the agelong tradition of selecting the members of the panel in the order of seniority.

“Since the 1979 presidential election, the first presidential election in Nigeria, the tradition in the Supreme Court has been that the seven most senior justices of the Supreme Court are empanelled for the purpose of determining the presidential election appeal,” Ugochinyere noted. He listed the seven most senior justices and their year of appointment to include the CJN, Ibrahim Tanko Mohammed (2006), Bode Rhodes-Vivour (2010), Nwali Sylvester Ngwuta (2011), Mary Odili (2011), Olukayode Ariwoola (2011), Musa Datijo Mohammad (2012) and Kumayi Bayang Akaahs (2012). He alleged that the CJN wants to deviate from the tradition and replace some of the justices with their juniors. According to him, the list CUPP intercepted showed that the panel that would hear Atiku’s appeal is made up of the CJN, Rhodes-Vivour, Datijo Mohammed, John Inyang Okoro who was appointed in 2013, China Centus Nweze (2016), Aminu Adamu Augie (2016), and Uwani Dauda Bags (2018). 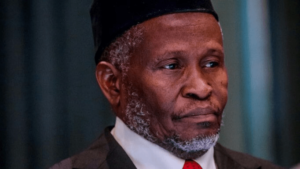