Staff of the College of Education, Ekiadolor, in Edo State, have blocked the main entrance gate to the Edo Government House a.k.a Osadebe Avenue, in Benin City.

Igbere TV reports that the College of Education staff, in their numbers, are protesting over unpaid salaries by the State government, for the past twelve months.

Today’s protest makes it about three times the College staff, under the aegis of Coalition of Unions in College of Education, will be storming the Edo Government House in the last 30-days.

Efforts to obtain comment from spokesman to the Governor, Mr. Crusoe Osagie were not successful. He had, however, dismissed previous protests as “political.” 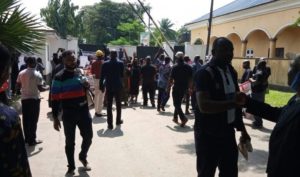