Manchester City fell behind to Atalanta on Tuesday before Raheem Sterling inspired Pep Guardiola’s side with an 11-minute hat-trick, MySportDab reports.

Raheem Sterling scored a second-half hat-trick as Manchester City moved closer to securing their progression from Champions League Group C with an emphatic 5-1 win over Atalanta.

Ruslan Malinovskiy’s penalty capped a fine start for Atalanta, but the Serie A side were little match for City once Pep Guardiola’s men – led by the impressive Sterling – clicked into gear.

The England star was unplayable and showed City have the cutting edge Guardiola wants if they are to triumph finally in Europe.

City’s third straight group win in this entertaining game means they are within touching distance of a place in the knock-out stages. watch the video…

He bags a hat-trick on the night…

And has now been involved in 22 goals across his last 17 home Champions League outings (14 goals, 8 assists) ? pic.twitter.com/cLdvu74ebR 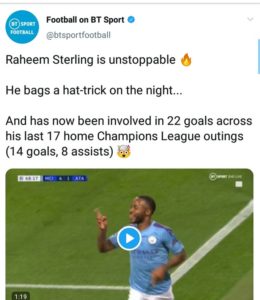