Real Madrid have been named the most valuable brand in world football, MySportDab reports.

Los Blancos are now worth 1.646 billion euros and overtakes Manchester United (1.472 billion euros) into first place on the list.

Real Madrid value has risen by 27% over the past year and the club has become the first in the world to receive 750 million euros in ticket revenue.

“Real Madrid have shown this year who truly reigns supreme in the world of football,” said Bryn Anderson, director at Brand Finance.

“They triumph not only as the most valuableand strongest brand but their enterprise value and stadium are also ranked second to none.

“The most successful club in the history of European football is finally reaping the benefits of decades of spectacular on-and-off-pitch performance.”

The rest of the top 10 is dominated by Premier League sides with Manchester City, Liverpool, Chelsea, Arsenal and Tottenham in the illustrious group.

English clubs dominate that list with 43 per cent of total brand value.

The Bundesliga follows closely behind with 13 clubs but ultimately ranks behind La Liga for combined brand value.

As for other Spanish clubs in the top 50, Atletico Madrid stay in 14th, Sevilla have risen 13 places to 35th, Athletic Club drop to 45th, Villarreal climb to 47th and Valencia are 48th.

TOP 10 MOST VALUABLE FOOTBALL BRANDS IN THE WORLD 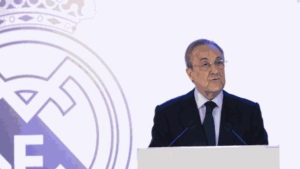