Mavin record’s frontline artist and self acclaimed king of the new school Rema has finally reunited with the uniport girl he fell in love with at the Trace in the city music concert held in the university of Port-Harcourt last month.

Rema who performed at the trace in the city concert brought the pretty uniport student on stage during his performance and they both happily rocked the stage together to the admiration of students and fans.

Rema later tweeted that he was missing the pretty girl and would love to meet her again.

REMA
@heisrema
I wish I could see her again �❤️ #Uniport

His wish was finally granted at the chop life summer season charity festival in Port-Harcourt on Saturday 31st August when he was reunited with his pretty crush.

During Rema,s performance at the well attended charity concert,He asked about the girl and she was immediately brought on stage and they both hugged passionately and danced together as the crowd was thrown into a frenzy.

He later went to his Twitter page to reveal that he has found his uniport girl.

Should we be expecting something special from the two obvious lovebirds!? 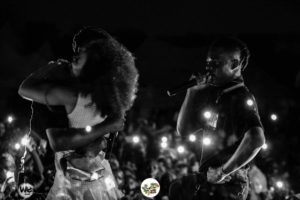