A former Goldman Sachs banker, Ellias Preko, who helped the former governor of Delta State, James Ibori, to hide funds in offshore accounts has been ordered to pay back £7.3m or face 10 years more in jail.

Preko, a 60-year-old Ghanaian had been convicted and jailed for four and a half years back in 2013 for his role in the fraud.

Preko has three months to repay the money or he could face another 10 years in jail, reports Daily Mail.

Preko, who represented himself, told the court in a previous hearing much of the cash had been spent on election campaigning back in his native Ghana.

He said he had run as a candidate for the centre-right NPP party back in the mid-2000s.

Preko explained that Ghana is predominantly a cash-based society and that few receipts exist for his campaign spending.

Ibori was jailed for 13 years in 2012 after he admitted to stealing state funds during his two terms in office as a governor.

The court heard how he pocketed up to £160 million from government treasuries. 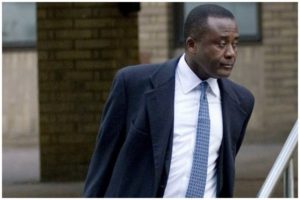