Rivers State residents have been asking if the Governor, popularly known as Mr. Project, is still living in the state. This is due to the overwhelming poor state of roads across the state.

Major parts of the federal and state roads are bad, thereby increasing the pains and suffering of motorists and other road users.
Some of the affected areas include: Oyigbo (Porthacourt -Aba Road), Ada George road by Location junction, Rumuolumeni, Ikwere road by Market junction, East-West road by Nkpolu, Rukpoku by BigTreat, Rumukwurusi by Sobaz, Rumuodara by Omega House and D/Line by Okija road, among others.

The bad portion of the roads has forced many motorists, especially those plying the notorious Nkpolu and Location junctions, to abandon the route for alternative ways to their destination, which consumes extra time and money.
For example, trip from Rumuokoro to Choba in Obio/Akpor Local Government Area, which was N100 now goes for between N200 to N300 for taxis using alternative routes while others.

The two-lane of Nkpolu junction has completely collapsed and commercial motorists are having a field day due to the failed road.
Residents face similar challenges in other bad roads across the State. Some car owners prefer to use public transport due to bad roads and traffic gridlocks. The situation, it was observed has slowed business in the state capital.
Criminals take advantage of the bad portion of the road to rob and kidnap residents, especially between 6:00p.m. and 10:00p.m.

Meanwhile, the State Ministry of Works has announced that work would commence at the bad Location junction by Mgbuoba/Ada George Road tomorrow. Permanent Secretary of the Ministry of Works, Rivers State, Dr. Clifford Ndu Walter, in a statement, informed the public that the axis of the road would be closed to traffic from August 8 till August 10, due to the commencement of rehabilitation work on the road.

He urged commuters and other roads users to use the alternative lane pending when the road is fixed. However, there is no news yet about moves to repair other collapsed roads across the state.

Residents are calling on Governor, Nyesom Wike, also known as Mr Project and the Federal Government to come to their aid. 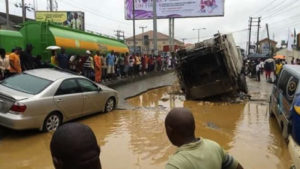